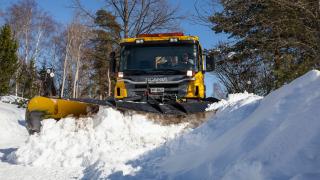 The maintenance work carried out by the city includes cleaning and ploughing of the street and market areas, prevention of slipperiness, removal of packed snow and the transport of snow to reception areas.

In the winter, the streets in Vantaa are maintained in the order determined by the maintenance classification. During the summer, all street areas are swept and washed with machines. Damages in asphalt and stone-paved areas are repaired, and traffic signs, waste bins and other equipment, as w…ell as kerbstones, are installed if needed.

In addition to the City of Vantaa, the traffic areas in Vantaa are also maintained by the Finnish Transport Infrastructure Agency, Finavia and private road maintenance associations. For example, the Finnish Transport Infrastructure Agency is responsible for highways, main roads and ring roads, while Finavia is responsible for the airport's surroundings.

The maintenance responsibility of the train stations and their surroundings is divided between the city, the Finnish Transport Infrastructure Agency and VR. For example, the city is not responsible for the stairways leading to the platform.

Property-owners are responsible for maintaining their access roads and removing snow.
View on servicemap opens in new window, links to another website

Ploughing can begin when there is a 3–5 centimetre layer of snow. Before this, roads can already be salted and gritted. Ploughing can also be performed as a preventive maintenance measure.

The ploughing of streets is usually carried out in the order of urgency according to the maintenance classification.

If the snowfall continues for a long time, residential streets may not be reached until days after the snowfall has ended. The goal is to complete the finishing work after a snowfall immediately after ploughing.

Vantaa has about 1,600 kilometres of street to be maintained.

The streets are divided into three maintenance categories:

The maintenance category is defined on the basis of traffic volume and quality as well as transport needs. Special needs can arise, for instance, from lorry and bus terminals, steep hills and heavy pedestrian and bicycle traffic on the routes to stations.

Children’s day care centres, schools, health centres and other service centres have been taken into account in the street classification and in practice.

The smooth transport of the equipment has also been considered in the planning of ploughing routes. During the ploughing season, barriers on the street are moved aside to allow both the equipment and people to move.

The timing and coordination of ploughing of roads and footpaths sometimes causes problems as the road should be ploughed first so that the adjacent pedestrian and bicycle way is not blocked. However, it is not always possible to coordinate the use of several machine units.

When the road is being ploughed, the grader is usually followed by a loader, opening the driveways. If necessary, the city removes the snow that has accumulated next to the pavement if it hinders traffic. However, after heavy snowfall, it may take several weeks to remove the snow.

In Vantaa, the city performs 65 per cent of the ploughing work, and the rest is performed by contractors. There are three areas, Korso, Koivukylä and Hakunila, which are maintained entirely by a private contractor. To assist the city's own equipment, private machinery contractors, vehicles and vehicle drivers for snow removal and ploughing are also used in other areas of Vantaa.

During a snowstorm, about 50 of the city’s own employees and the same number of contractors carry out their duties. The equipment includes graders, snowploughs, salt spreaders and gritters as well as snow removal vehicles. Stairs, bus stops and similar are maintained by people.

Depending on the amount of snow, the cost of winter maintenance varies between EUR 4 million and EUR 7 million. The ploughing of streets during a snowy winter doubles the cost. The cost of a single snowstorm for the city is about EUR 100,000. In recent years, the cost of street maintenance has been less than EUR 2 per square meter.

The largest expenditure items include ploughing, prevention of slipperiness, snow removal and sand removal. The annual budget for street maintenance in Vantaa, with all repairs, cleaning and winter maintenance, is about EUR 12 million.

The plot owner’s responsibilities include ploughing and other maintenance tasks of the plot’s access road. Ploughing can create snow piles at a plot's access. It is the plot owner’s responsibility to remove the snow piles. There must be a dedicated place for snow piles on the plot. Snow must not be moved to the street or to the neighbour's plot. Housing companies often use a property maintenance company that ploughs the yard and adjacent street areas.

The owner of the plot should also ensure that the drainage pipe under the plot’s access road remains operational throughout the year by removing ice, snow, leaves and debris that prevent the passage of rainwater.

Gritting is started based on weather forecasts or weather conditions. The purpose of gritting is to prevent slipperiness. The city does not usually sand carriageways, but certain locations may be gritted, for instance, hilly areas and bus stops.

Pavements and cycle paths are regularly gritted during the winter. As a rule, pavements are not salted. Excluding special locations, slipperiness is typically prevented by gritting.

Vantaa uses safety grit in preventing slipperiness of pavements and cycle paths. The grain size of safety grit is equivalent to the typical crushed gritting sand.

The material used for gritting has been washed, and the grain size is between 1 and 6 mm. By washing the aggregate, we can remove fines (less than 1 mm) from the gritting sand. This method aims to minimise street dust in the spring.

Grit that is made without crushing has less friction than crushed aggregate, but the crushed aggregate may puncture bicycle tires. The use of safety grit is better for winter cyclists, without forgetting the safety of pedestrians.

Although footpaths and cycling paths are gritted with bicycle-friendly gritting sand, we recommend that winter cyclists use well-maintained, rough-textured and puncture-resistant bicycle tires.

The street dust season is usually at its worst when the coldest winter weather is over and the streets are dry, but the temperature is below zero at night. The city aims to minimise the amount of street dust in the spring.

The removal of gritting sand usually begins between March and April. Gritting sand is first removed from public transport streets and other busy streets, as these streets have the most dust.

Residential streets are usually cleared from gritting sand after the main streets because they have the lowest amount dust and traffic.

The city aims to wash and clean every street by the 1st of May. During the spring and summer, the streets are washed on a continuous basis.

Outside office hours, in the evening and on weekends, call the public emergency number if you notice an urgent and hazardous fault in the city’s street areas.