The rail network is the backbone of Vantaa, as well as an important part of the entire metropolitan transport system. Vantaa keeps on growing sustainably along rails. Vantaa light rail interconnects Vantaa’s different regions more tightly together. 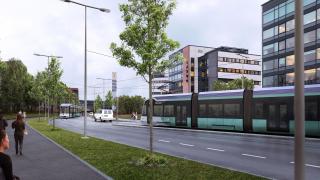 City of Vantaa is an international airport city in the middle of the Helsinki metropolitan area. An attractive city that grows fast is the fourth biggest city in Finland with more than 228,000 inhabitants. More than 10,000 companies operate in Vantaa, providing more than 100,000 jobs, and the fastest-growing business area in Finland, Aviapolis, is situated right next to the airport area.

Vantaa keeps on growing along rails, and therefore Vantaa is planning on building a light rail route. The Ring Rail Line combined Vantaa and the airport as part of the core of the metropolis. Vantaa light rail continues this development by interconnecting Vantaa’s different regions more tightly together. It combines Hakunila and Länsimäki areas with the rail network and creates a direct connection to Tikkurila, Aviapolis, and the airport. The rail network is the backbone of Vantaa, as well as an important part of the entire metropolitan transport system.

The general plan of Vantaa Light Rail was completed in 2019. The city council decided that planning of the light rail will be continue. Further planning started in fall 2020, and it will devise street and park plans as well as local detailed plans that enable building of the light rail. In addition, a disposition plan/strategical plan to dictate urban development along the route will be devised.

The Vantaa Light Rail is a significant investment into Vantaa’s future. The light rail translates into a great leap forward as regards Vantaa’s growth and development. It will have a leading role to play in stimulating the economy, since it will bring about new jobs and new business prospects along public transport connections.

The light rail route will establish the most important growth channel of the city, and it is forecast to bring about 60,000 new residents and 30,000 jobs.

New residential and job areas are planned from the perspective of the public transport system. The route of the light rail will form a development corridor, which will not only bolster the centers already located along the route, but also create new vital small centers with their local services along the stops. 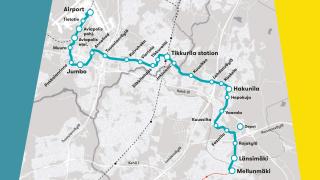 Vantaa light rail supplements the metropolitan rail network and translates into a substantial addition to public transport. In the initial stage, Vantaa light rail will be implemented as bus trunk line 570 that started operating in the fall of 2021. The trunk line can accommodate around half the customers a light rail can, which means that, in the longer run, its service capacity is insufficient as the city keeps on growing.

The light rail will be connected with the rest of the transport system through the metro, the main railway line, the Ring Rail Line and, in the future, Helsinki’s expanding light rail network. 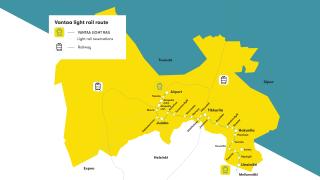 Vantaa Light Rail is the first light rail route in the City of Vantaa. The route is 19 kilometres long. It combines Hakunila and Länsimäki areas with the rail network and creates a direct connection to Tikkurila, Aviapolis, and the airport.

Vantaa Light Rail route is marked in the mapping service of the City of Vantaa.

Check out the route and stops of Vantaa Light Rail