A budget is a plan concerning city's actions and economy. The city council decides on it annually. 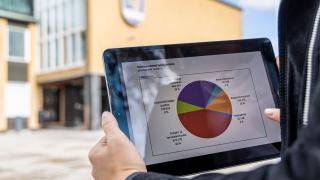 Each year the city council decides on a budget. It is approved in the end of the year before a new fiscal year begins.

City strategy is a key element in planning a budget. Through the strategy and annual budgets the council members are able to have an impact on how the city functions. The budget consists of plans for both the upcoming fiscal year and the three years following it. Budget defines how resources are collected and allocated.

In other words, a budget presents us:

The wellbeing services county reform will enter into force as of the beginning of year 2023 and it will have major impacts on not only the city's operational changes but also on the city’s finances. Removed from the city’s finances will be costs arising from social welfare, healthcare, and search and rescue operations, but cuts will also be made in tax revenues and state contributions. Furthermore, individual tasks—such as student welfare and rehabilitative work activity—will no longer be among the responsibilities of the city. Approximately 4,000 people, currently employed by the City of Vantaa, will transfer to the Vantaa and Kerava wellbeing services county.

In the course of 2022, the coronavirus pandemic has weakened in Finland, and we have been able to lift the COVID-19-related restrictions. In February, Russia’s attack on Ukraine began, and it again changed the city's operating environment in one go. Decisive and fast recovery from the economic crisis brought about by the COVID-19 pandemic was replaced with new economic uncertainties as inflation drastically increased, for instance, because of growing energy prices and interest levels. The threat of recession has increased throughout Europe.

Vantaa as a growing city will systematically continue to balance its economy, while simultaneously investing in the goals compliant with its city strategy. The City of Vantaa’s operations will, in the future, focus on education, learning, culture, and vitality. Moreover, ensuring local involvement and democracy also constitutes an important task of the city.

The City of Vantaa will next year have numerous important investment projects, the majority of which are targeted at new building and repair. In 2023, five daycare centers will be completed, contracted by the city and the group company. Planning of Vantaa light rail and Elmo swimming hall will continue. Vantaa Vocational College Varia’s investment project in Vehkala will progress, and a learning campus is being planned for Tikkurila, in addition to the big Jokiniemi project. Developing Kuusijärvi Recreation Center Vantaa into a major nature site will also continue. After a lengthy wait, Kivistö shopping and service center will be completed, and the city will transfer some of its services into the center.

3.10. Vantaa has a healthy economy, the balance has strengthened, and we have m…

After a budget has been made, the city monitors how the goals and plans specified on a budget are achieved. The budget is regularly evaluated. Finally, the financial statements of a previous fiscal year are presented to the city council.

Director of Finance and Strategy
043 824 9254 firstname.lastname@vantaa.fi