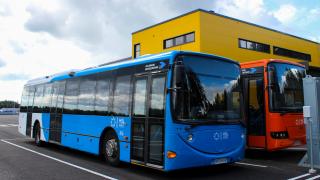 The Helsinki Region Transport (HSL) joint local authority is responsible for the planning and organising public transport as well as passenger information in Vantaa. HSL also decides on the ticket options, ticket prices and discount groups.

Where are you going?

The City of Vantaa is responsible for the planning, design, construction and maintenance of public transport routes, stops, bus terminals and turnarounds. For example, if a bus shelter is broken, you can inform the Urban Environment Customer Service.

Every year, the City of Vantaa allocates a certain amount of money for improving bus stops. New shelters and other improvements are built annually in Vantaa, usually about 20 pieces in total. Vantaa is currently only building illuminated glass bus shelters because of their safety and cleanliness.

The stops on which a new bus shelter will be built are selected according to the use, i.e. based on the average number of passengers using the stop. Even if there are enough passengers, the construction of a new bus shelter may be prevented by technical reasons, such as lack of space, a sloping street or pipes under ground.