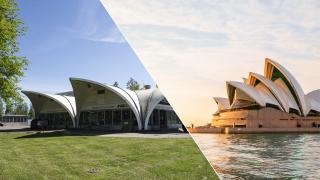 They claim on the other side of the world that in the 1950s the whole world changed their perception of 20th century architecture by building an opera house. If this is the case, then in Vantaa the direction of architecture was changed with the help of Matti Suuronen in 1970.

When the Sydney Opera House was built to shape a better and more enlightened community, Suuronen wanted to build prefabricated and modular buildings which were easy to transport and erect. He used materials such as reinforced plastic and fibreglass to create retro-futuristic shapes.

In retrospect, perhaps building’s were a little too easily to be transported, as there are only few left. Luckily Simonkylä's Casa Finlandia, model CF-200, has remained in place. At the very same spot, where it was originally erected after being build at Polykem's factory in Hiekkaharju, Vantaa. So real Vantaa know-how.

In Sydney, they say they hold forty shows every day and attract more than eight million visitors a year, and Vantaa is no worse off. At least forty cars are serviced daily at Casa Finlandia in Simonkylä, Vantaa. Such a record is not kept of the annual number of refuelers. So drive by and fill up your tank or service your car at one of the most unusual service stations in the world.