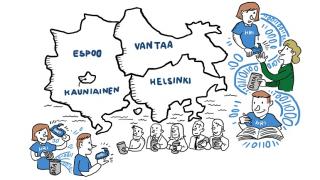 Launched in spring 2011, the Helsinki Region Infoshare (hri.fi) service brings the public data of cities to everyone’s reach. Speakers at the webinar will recount the first steps of the pioneering service and discuss what the next ten years of open city data may bring.

Although in Finland, information produced by public administration is exceptionally open, it was not all that easy to get hold of for your own use in the early 2000s. With open data, public procurements of cities can now be studied by anyone at home on their couch. Users can download the procurement data of cities, anything between commodity procurements worth a few euros and construction works worth millions.

– Our cities today are building APIs into their data systems to allow the transfer of machine-readable data to other applications. Open APIs make it easier to use the data both within city administrations and in applications created by external actors, says Hami Kekkonen, Project Manager of the HRI service.

As an example, open data on the cities’ public transport is already being extensively used by, for instance, the Whim all-in-one app for mobility and by dozens of other mobile apps built by application developers.

The HRI service – a model for others

In the early 2010s, a global movement for open data started to promote the opening of public data. Finland quickly became a model in terms of open data. An important milestone in the opening of public data was the launching in 2011 of the HRI service by the cities of Helsinki, Espoo, Vantaa and Kauniainen (together forming the Helsinki Metropolitan Area). The service, which provides data free of charge to journalists, app developers, students and other residents, has been an important model for public administration elsewhere in Finland, too.

HRI provides open data ranging from 3D city models to traffic accident statistics. The APIs built in the data systems of the cities have become popular data sources. Through them, machine-readable updated information on, for example, public transport, events and tourism, can be obtained.

Over the years, historical maps and air photos of the cities have been the number-one target of interest of the public. When in spring 2021 the HRI service celebrated its tenth anniversary by announcing a public vote on the most interesting app built using data obtained via HRI, the winner was “Helsinki ennen ja nyt” [Helsinki earlier and now] created by Juuso Lehtinen. The online service compares current streetscapes in Helsinki with what they looked like a hundred years ago. It was built in just one weekend in 2014 by combining old photographs published as open data with Google’s street views.

Welcome to join our anniversary webinar on November 11th from 1 pm to 4.30 pm

For full programme of the webinar, registration and information (In Finnish).

The keynote speech at the anniversary webinar will be given by Theo Blackwell, Chief Digital Officer at the Great London Authority. With the exception of Blackwell’s speech, the webinar will be conducted in Finnish.