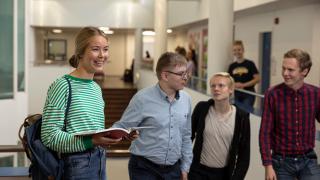 The lessons are usually held between 8.15 and 16.15. Lessons of several different subjects are held during regular days. The studies also include independent working, in addition to the lessons.

The amount of work during a period varies depending on the elected study courses. There is a ‘double week’ between the periods with a different timetable; during this week, the day’s studies only comprise two study units. This allows for various visits and more detailed studies about a certain theme or subject. An individual study unit can also end during the double week.

Finally, every period ends with a closing week with exams or other final assignments related to the ending study period.

General upper secondary schools offer studies mainly in the areas of mother tongue and literature, foreign languages, mathematics and natural sciences (e.g. mathematics and biology), humanities and social sciences (such as history), art and physical education (such as music), and guidance counselling and thematic studies.

The student will receive guidance related to their studies and further studies based on their personal needs. A personal study plan will be compiled for each student at the start of their studies, and this will be updated regularly as the studies progressed. In the future, also students who have dropped out or have graduated but did not find a place in further education are entitled to receive guidance from their general upper secondary school for one year after their studies have ended.