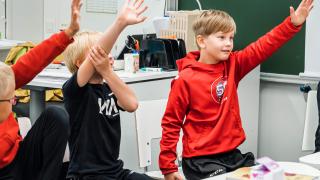 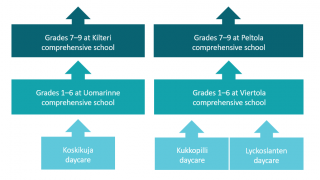 The application procedure for language immersion studies takes place in connection to enrolling in school via Wilma, 5–17 January 2022. New students are sent a letter for new students that has instructions for signing in Wilma. Remember to note down the educational institute with language immersion you are applying for in the Wilma form.

Applying with a printed form is also possible. The filled-in form should then be delivered to the school you are applying for by 17 January 2022. The student must also be normally enrolled in the school via Wilma.

Information events for guardians are held annually in January.

What is language immersion?

Swedish-language immersion is a teaching method in which children learn Swedish by hearing and listening it and using it in daycare and at school. In the Swedish language immersion class, pupils learn to read and write directly in the immersion language; in other foreign-language teaching, pupils learn to read and write in Finnish first. Language immersion teachers speak Swedish with the children. The personnel communicate with guardians in Finnish. The child may use Finnish too at first, but they are encouraged to use the immersion language from early on. Pupils learn the language via thematic work, stories, songs, rhymes, and play. The meaning of words and expressions are complemented with facial expressions, gestures, and pictures. The aim is to rouse the children’s interest and create a positive attitude towards a new language. Early foreign language teaching capitalises on children's sensitivity to language learning and makes them eager to learn foreign languages.

Language immersion classes follow the school’s general curriculum, and the foreign language is both the tool and subject of learning. In the first grade, all teaching takes place in Swedish, and the students will first learn to read and write in Swedish. However, the students can use their own mother tongue until they have achieved sufficient proficiency in Swedish. Teaching of mother tongue will start in the second grade, given by other teacher than the class teacher. The language immersion classes also familiarise the students with Swedish culture and the culture of Swedish-speaking Finns.

For whom is language immersion teaching meant?