Koiramäki characters, familiar from Mauri Kunnas’ picture books, will spend the summer at Håkansböle manor in Hakunila. The exhibition is open on summer weekends from May 7 to September 11, 2022. 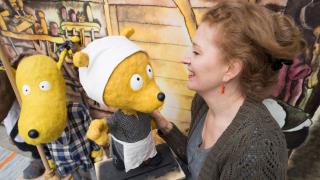 The Koiramäen kartanolla (At Doghill Farm) exhibition introduces children to rural life in the 1800s through play.

The At Doghill Farm exhibition was originally planned by Seinäjoki’s museums, after which the exhibition was on show at Lohja museum. In Vantaa, the family of dogs will, once again, face a totally different environment.

In the days of Koiramäki (Doghill), that is, in the 1800s,  the manor itself was like a big farmhouse. Everything was done on a bigger scale with more cultivated land, livestock, and pets. In Håkansböle,  the majority of the exhibition has been placed in the old stable, but the dogs’ kitchen is in the genuine baking shed, which has a real baking oven and wooden shove for the children to play with.

“I think that the dog family likes it better here in the servers’ quarters, in the world of work. The main building may be a bit too extravagant for them. On the other hand, the Doghill children, Kille and Elsa, have on their trips to the city visited very fine homes, too,” Yli-Karhula reminds.

Even if you already visited the At the Doghill Farm exhibition in Seinäjoki or Lohja, we recommend that you visit the Vantaa exhibition, as well. Vantaa's specialties consist of horse cabriolets and carriages on exhibit in the stable. The idea of getting to know urban life of days gone by through play remains unchanged, and we have even added to the play options.

“The exhibition allows you to weave rag rugs, card, do the laundry, try ironing on a mangle board, fish, work at the henhouse, bake and make food, take a peek at the drying barn, etc.,” Yli-Karhula lists.

The exhibition shows five family characters from the Koiramäki books: children Martta, Elsa, and Kille, as well as Tilta and Grandpa. The characters were implemented by visual artist Päivi Sormunen.

The On the Doghill Farm exhibition is open on summer weekends from May 7 to September 11, at 11:00-16:00. No admission fee. Håkansböle manor’s address is: Kartanontie 1, Vantaa.

The On the Doghill Farm exhibition in Vantaa Event Calendar.