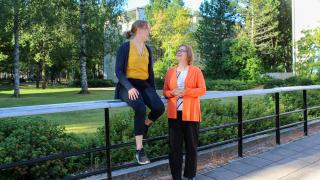 The process began in April with the idea-generation stage where the residents submitted their proposals for developing their own districts, and it reached its climax in the proposals that were voted on in September - October. The proposal that reaped the most votes will be implemented in each district, as well as the proposal with the second biggest number of votes, etc., until the allocated sum of money is reached.

“It is great to see how actively the residents in all the three districts participated in the different stages of the process, from submitting ideas to voting on them. I thank everybody for their cooperation.” Next year, we can enjoy the results,” applauds community involvement coordinator Laura Lettenmeier.

The projects to be carried out in Länsimäki consist of: placing more trashcans in parks and along passageways (€6,000); planting cherry trees (€5,000); arranging a gaming event (€1,000); arranging outdoor gym practice (€1,000); installing frisbee-golf baskets (€2,000); planting flowers (€4,000); cleaning and renovating the front of the store on Maalinauhantie (€15,000); cleaning trenches in connection with a cleaning event and making a sign telling about the history of the trenches (€3,5000); and planting berry bushes or other useful plants (€2,000) as well as a flower meadow for insects (€5,000).