Children and young people in Vantaa are invited to participate in the planning of Vantaa Light Rail with an online and mobile game. The game and game instructions are produced in Finnish, Swedish and English. 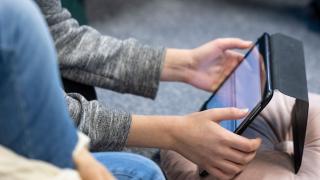 Pupils in the city of Vantaa can play a game to plan Vantaa light rail. Teachers and students are invited to participate in the planning with an online and mobile light rail game that surveys the views of children and young people. The playing time is 15.11.–22.12. and all primary and secondary schools and upper secondary level institutions in Vantaa can play. The game and game instructions are produced in Finnish, Swedish and English.

In September, the light rail game was tested with students from Askisto, Kuusikko, Martinlaakso, Simonkylä and Uomarinne schools. In total, more than 100 students tested the game that moves along a light rail route and helps the light rail team to plan the Vantaa light rail.

- The game platform worked smoothly, and the login was easy, the idea of the game was good and clear. The game seemed to inspire students more than a traditional survey, says class teacher Donna Palojärvi from Uomarinne School.

- The students were able to progress in the game independently and the tasks were interesting. It is great that the students are gaining experiences of influencing in a new way, says Minna Halonen, the teacher who guides the student union of the Martinlaakso school.

Pupils also kept the questions and instructions in the game clear and felt that playing the light rail game was a good way to influence the planning of the Vantaa light rail. The pupils of the Martinlaakso school didn’t mind that the light rail route does not run in Martinlaakso.

More information about the game and instructions can be found at osallistuvavantaa.fi website. Game instructions are also directly sent to primary and secondary schools and upper secondary level. The game is implemented on the Seppo.io game platform.

All the school classes that have played the game will be competing to meet with the Vantaa light rail team as the main prize. There will also be five candy party boxes for the classes as additional prizes. The implementation of the grand prize is planned together with the winning class and teacher.