The big issues in Finland, Europe and the world will be solved in cities – whether we are talking about combating climate change, accelerating sustainable growth or solving talent shortages. Cities are building a sustainable future through EU networks and projects. Finland’s Six Cities – Helsinki, Espoo, Tampere, Vantaa, Oulu and Turku – must also be more strongly involved in national EU advocacy work. 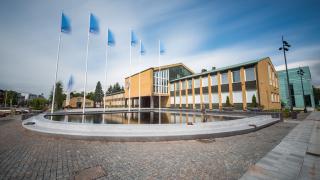 The Six Cities are active members of Eurocities, a recognised association of urban policy-makers representing more than 200 cities and 130 million people in Europe. The City of Espoo will organise the annual conference of the Eurocities network on 8–10 June 2022. It will be attended by, among others, European Commission Vice-Presidents Frans Timmermans and Dubravka Šuica, Finnish Minister for European Affairs Tytti Tuppurainen and about 400 representatives of European cities. The central theme of the annual conference will be deepening the dialogue between cities and the Commission in the fight against climate change.

Finland’s six largest cities have been engaged in dialogue with the EU institutions for decades. Dialogue between the cities and the Commission has been developed in the context of the Urban Agenda, for example. The inclusion of urban missions in EU funding programmes is a positive development. Finland’s Six Cities have been active developers of urban policy, implementing the Six City Strategy (6Aika), which is the only one of its kind in Europe.

On Europe Day, 9 May 2022, Sitra published a report on the EU legislative process and participation in it in Finland.  One of the main conclusions of the report is that Finland’s EU legislative process does not provide enough support for advocacy work in advance, which would be important. We support the structural reform of EU advocacy work as outlined in the report. Cities must be more actively involved in the formation of Finland’s EU agenda and EU positions.

Therefore, the next government programme must also recognise the importance of cities in EU cooperation and set common goals for the government and cities, so that Finland will be greener, more digital, more accessible and more inclusive in the future. The voice of young people has been well heard in the forward-looking Future Mentors programme of the annual Eurocities conference. We thank the City of Espoo for the fact that young mentors have challenged us mayors to look at the activities of our cities through the eyes of young people.

The Eurocities conference will provide an opportunity for European mayors to address the situation in Ukraine. The Six Cities support Ukrainians in need of temporary protection. In general, we also support the reconstruction of Ukraine as part of the European urban community.