Well-being and CommunalityTransportSports and outdoor activities

6–15 May 2022, The Helsinki Metropolitan Area Cycling Week will showcase the joys of cycling through a wide selection of events. During the week, cycling commuters will be served breakfast, bicycles’ condition will be assessed, and the need for safe cycling conditions for the whole family will be emphasised. Later in the week, summertime cycling tours will be planned together. 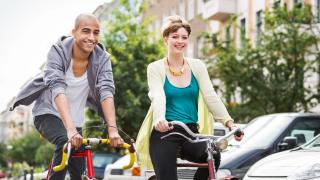 The Cycling Week in the Helsinki Metropolitan Area is coordinated by Helsinki Region Cyclists (Hepo). The week’s events will be organised in cooperation with the cities of Vantaa, Helsinki and Espoo, Helsinki Region Transport (HSL), and other operators in the bicycle sector. Hepo volunteers will also contribute to the event.

The free and low-threshold events welcome cyclists of all ages and levels. You do not need to have your own bike to participate, city bikes are an adequate option. There will also be plenty of events online.

Cycling Week, which will be held nationally for the 32nd time, continues to be a diverse selection of joyful cycling events. Opening event of the Helsinki Metropolitan Area Cycling Week on Saturday 7 May will take place in Kansalaistori Square, Helsinki. Trash Hero DJs will provide the music for the event. In addition to the exciting atmosphere, the event will also have a free bike inspection service and information about the traffic rules concerning cyclists. The opening event will be crowned by a Kidical Mass bike parade demanding safe cycling conditions and a concert by Maestro Ruscello e Gruppo Velocita during a bicycle picnic.

During the weekdays, Helsinki Region Cyclists and the association’s partners will provide commuting cyclists with breakfasts in Vantaa, Helsinki and Espoo. In addition to the breakfasts, there will also be other activities, from a bicycle trip for families to information about traveling by bike, local orienteering, and social media program. Even though the programme is focused on spreading information about the diversity and joys of cycling, the more serious issues will not be excluded from the conversation.

“The Cycling Week events will offer information about how our bicycle culture is evolving and how cities are developed to be more bicycle friendly. Getting to places by bike is increasingly attractive,” says Henni Ahvenlampi, executive manager of Helsinki Region Cyclists.

The aim of both the Helsinki Metropolitan Area cities and the Cycling Week events is to encourage people to cycle and increase the use of bicycles in all traveling.

Welcome to the Bicycle Week events

Saturday, 7 May, Opening of the Cycling Week and Kidical Mass

Hepo and its cooperation partners will held the opening event of the Bicycle Week in Kansalaistori Square in Helsinki on Saturday, 7 May from noon to 5 p.m.

The opening event includes the Kidical Mass bike parade around central Helsinki. The name Kidical Mass is a pun that references the Critical Mass movement, which is an internationally known movement demanding better cycling conditions. The purpose of the parade is to highlight the importance of safe cycling infrastructure so that cycling can be a safe mode of traffic for families. Kidical Mass will depart from Kansalaistori Square at 1.30 p.m. and it will last for an hour.

Throughout the event, there will be all kinds of activities in Kansalaistori Square: music, relaxation with friends, and the opportunity to have the condition and safety of your bike checked (free of charge) by a bike maintenance professional from Haagan Pyörähuolto Oy.

At the opening event, family bike owners and people interested in family bikes will have the opportunity for networking in relation to selling and buying family bikes. Representatives of Helsinki Region Cyclists will also be present at the event. The Kansalaistori Square events will provide you with tips and information about cycling, bike maintenance, traffic rules and the city’s bike traffic infrastructure.

The event will end on a bike picnic during which the music will be provided by Maestro Ruscello e Gruppo Velocita. Bring your picnic blanket and treats with you!

Sunday, 8 May, Bicycle ride for the whole family

To celebrate Mother’s Day on Sunday, 8 May, there will be a bicycle ride for families departing from Kansalaistori Square, Helsinki. The adventure will be suitable for all family members. Experience the joys of cycling in a group by participating in the free and instructed trip. The trip will start from Kansalaistori Square at 10.30 a.m. The route is about 25 kilometres long and will take about 3 hours. The pace will be calm so that everyone can keep up. The ride will include seeing nature and culture sights and one longer break. You can also use a city bike to participate in the ride.

Tuesday 10 May, Wednesday 11 May, Thursday 12 May, Breakfast for cyclists and local orienteering

After a few years’ absence, the very popular breakfast event for cyclists will make a comeback to the Cycling Week programme! From Tuesday to Thursday, the Hepo volunteers will serve breakfast to cyclists in Helsinki, Espoo and Vantaa.

On Tuesday, 10 May, the breakfast will be served in Baana, Helsinki, under the Porkkalankatu bridge. On Wednesday, 11 May, those suffering from hunger and thirst will be served in Keilalahti, Espoo by Laguuni, and on Thursday, 12 May, at Maalitori Square in Tikkurila, Vantaa. Breakfast and coffee will be served 7–9 a.m. on each day.

On Thursday, 12 May, the Bicycle Week’s local orienteering route will also be published. The local orienteering event is an urban event that will take place in the Helsinki Metropolitan Area. The event encouraging local tourism is suitable for participants of all ages who are looking for interesting new activities for the summer. You can participate according to your own schedule, either with your own bike or a city bike. The orienteering targets include an exciting selection of the nature, culture and cycling infrastructure in the Helsinki Metropolitan Area.

The bike to store event encouraging people to make their shopping trips by bike will involve a social media challenge. The challenge invites city residents to share pictures of the loads they have transported on their bikes and the distances they have travelled by bike. In these times of expensive fuel, it benefits nature and your wallet and physical health to replace your car with a bike! Share your pictures on social media with the hashtag #kuormahaaste

On the bicycle touring day, the veterans of bicycle travelling will share their experiences in and tips for bicycle touring – be the tour local or further away. The interviews can be watched live and later on the Facebook page of Hepo.