Growing Vantaa to invest and bolster its services

Vantaa's financial development will continue in its positive course also during 2023, the year of extensive changes in municipal finances. The city will grow as well as invest in services, employees, and premises. At the same time, Vantaa keeps on reducing its debt and continuing its responsible productivity and growth program. 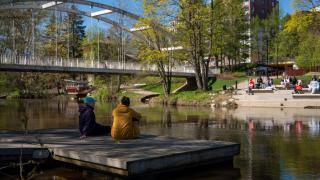 The financial framework compiled for planning the 2023 budget predicts more years of growth and development for the City of Vantaa. The framework’s profit and loss statement forecast a €165.4 million annual margin and a €50.1 million result for period next year.

“We have managed to produce services in an effective manner and to repel the threats of coronavirus. At the same time, we have continuously reduced the city’s debt: we have paid back €230 million over the past five years. The city has a healthy economy, and our debt falls within the national average,” says Ritva Viljanen, Mayor of Vantaa.

“We will continue to stick to our productivity and growth program, as well as to bear responsibility for the economy. Now, however, is the time to invest and stimulate. Urban development entails long-term activity that looks farther and farther into the future.”

In the financial framework, the City of Vantaa’s planned overall investment level in 2023 amounts to €158.3 million. The investment level is high: it is bigger than this year in spite of the fact that the social welfare and health care department will transfer from the city to the Vantaa and Kerava wellbeing services county at the beginning of 2023.

“Even though some of the tax revenues will transfer next year to the wellbeing services counties, the tax revenues paid to municipalities will still be partly based on previous tax years. In other words, Vantaa’s financial situation will be exceptionally solid next year. We must put these so-called tax tails immediately into effective use. We will invest in basic services also next year,” Viljanen adds.

The situation will balance in 2024-2025 when the exceptional tax revenues end.

During next year, Vantaa's worklist will consist of, among others, Elmo swimming hall, six daycare centers, and Cultural Factory Vernissa, which will undergo basic renovation. Construction work in educational institutions will continue at Jokiniemi and Kannisto schools, while Vaskivuori high school will be extended.

As the city keeps growing, services must be arranged for more and more residents.  The 2023 current finances framework accounts for the increased service need, and Vantaa is prepared to create plenty of new vacancies.  New employees will be hired, for instance, for basic education (84), early childhood education (55), urban culture department (20), and urban environment department (14).

“The city's urban strategy emphasizes, among other things, supporting learning and urban culture. We will hire, for instance, wide-skilled special needs teachers. After the coronavirus years, it is great that we now are in a position to boost our cultural and sports services. We will also increase the cultural grants to Vantaa’s cultural actors,” Ritva Viljanen is happy to tell.

In the future, many professionals from the government will transfer to the City of Vantaa, as TE services (Employment and Economic services) will become the responsibility of municipalities in 2024. In addition to the around one hundred vacancies from the government over the past two years, the City of Vantaa has hired sixteen employees for employment services. Next year, Vantaa will create three more vacancies for employment services.

In fall 2021, Vantaa compiled a recovery plan for after care of the coronavirus pandemic. The cost of the three-year plan totals €18 million, the majority of which will be spent this year. A sum of €3.7 million has been allocated in the 2023 financial framework for implementing the plan.

The appropriation will be spent on, for instance, hiring additional employees for pre-primary and basic education and in Vantaa Vocational College Varia, as well as on increasing high schools’ courses, instruction, and remedial instruction. Other planned measures consist of, for example, wellbeing mentoring, bolstering outreach specialized youth work, as well as support for employment and business recovery.

More detailed information on the financial framework for budget compilation is available in the agenda of the City Executive Board meeting (item 14).