Vantaa City Executive Board decided in its meeting on May 23, 2022, to make the Vantaa light rail disposition plan available for public inspection. In addition, the city executive board handled several other alterations to local detailed plans and entered the city’s 2021-2022 environmental liability report for information. 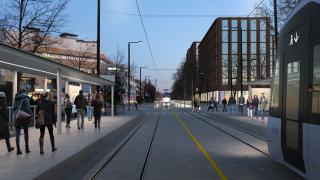 The city executive board decided to make the Vantaa light rail disposition plan available for public inspection for thirty (30) days. The disposition plan defines the vision of Vantaa as a light-rail city, as well as assesses the impacts of its dimensioning and development. The light rail disposition plan forecasts the following about the dimensioning of the planning area:  population could grow by more than 60,000 people and jobs by around 30,000 by 2050. The impacts of developing the light-rail city will be assessed on the basis of this disposition plan. We are currently analyzing the reports concerning traffic and property economics. A more in-depth assessment of the impacts will be compiled in the course of the summer. Based on the feedback on the disposition plan as well as on the impact assessments, we will finalize a draft proposal in fall 2022.

The City of Vantaa has striven to find a solution that will bolster the viability and attraction of downtown Tikkurila. The aim is to turn the shopping mall Tikkurila city block into an area with central activities and more than triple the building efficiency. The pedestal 2—3-story part is meant for businesses, topped by an office building, as well as four residential buildings, the highest of which will have 22 stories.

The present parking lot along Neilikkatie, in downtown Tikkurila, will be replaced by 6—8-story residential buildings. The office building currently on the site will be protected. The reference scenario proposes 194 housing units whose average size will amount to around 40 m2.

Okmetic Oy—the seventh biggest manufacturer of advanced silicon wafers in the world—has applied for an alteration to the local detailed plan for Piitie 2 in Koivuhaka. The block of industrial buildings will be turned into a block of industrial, storage, and office buildings, which would more than double the permitted building volume. The increased permitted building volume would allow locating of around 700 jobs on the Piitie lot.

The city executive board decided to make the proposals for the alterations to the local detailed plans available for public inspection for thirty (30) days.

Vantaa’s 2021-2022 environmental liability report was entered for information at the city executive board. The report manifests how well Vantaa’s environmental goals have progressed during the past year and how they were realized during the previous council term, 2018-2021. Vantaa’s greenhouse gas emissions have reduced on a yearly basis, oil consumption has diminished on the city's properties, mostly due to transfer to geothermal heat. In addition, Vantaa promotes liability, for instance, by making voluntary green deal purchasing contracts.