Vantaa City Executive Board had its last meeting this year on December 12, 2021. The meeting ratified the City of Vantaa’s Child Friendly City 2022-2023 action plan, confirmed the results of the youth council election, and decided to apply for membership in the EU Commission’s 100 Climate-Neutral Cities mission. The meeting also ratified the general grounds for grants and stipends of the city as of the beginning of 2022, as well as the general use and fee principles of the city's sports premises as of August 1, 2022. 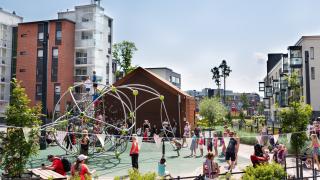 The city executive board ratified the City of Vantaa’s Child Friendly City action plan for the next two years. Vantaa became a member the of UNICEF’s  Child Friendly Cities model at the beginning of this year. UNICEF requires that all the municipalities participating in the network commit to extensive long-term work for the realization of good life for every child. A city-level coordination team—consisting of representatives of all the city's departments, city councilors, the youth council, organizations, and congregations—is responsible for Vantaa’s Child Friendly City activities.  The action plan includes the goals and measures set for the Child Friendly City work during 2022-2023. Activities will begin at the turn of the year and be monitored on a yearly basis.

The meeting confirmed the results of Vantaa Youth Council election. The actual members of the youth council consist of the 30 delegates that reaped the most votes. The new youth council’s term of office will terminate at the end of 2023. Vantaa residents born in 2003-2008 were eligible to vote. There were 54 candidates, and the voting places consisted of, among others, schools, educational institutions, and various public places. The number of those eligible to vote amounted to 16,050, of which 4,560 voted, which means that the voting percentage was 28.4. The youth council supervises the interests of the young and addresses issues important to the young. The representatives of the youth council have the right to attend and the right of discussion at the City of Vantaa committees and the city council. The council operations are not politically aligned.

The city executive board decided to apply for the EU call that will select around 100 European cities aiming at achieving carbon neutrality by 2030. At issue is the EU Commission's 100 Climate-Neutral and Smart Cities by 2030 call that constitutes part of the Commission’s Climate-Neutral and Smart Cities mission. The selected cities shall make a climate pact that describes the cities’ measures to achieve carbon neutrality, as well as the related investment plans. At issue is not a legally binding contract. A city participating in the mission commits to being carbon neutral in 2030. Vantaa’s present climate action, the goals set for it, as well as the execution and monitoring of the goals provide the City of Vantaa with good facilities for fulfilling the criteria set.